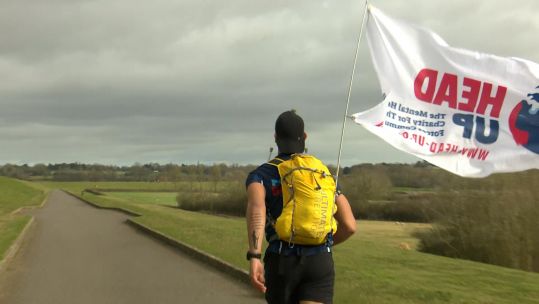 Paul Minter has made it his life’s mission to help fellow veterans with their mental health and is running 5000 miles in pursuit of a £3m goal for Head Up.

British Army Veteran, Paul Minter, started his world record-setting run on March 1st, 2022. This incredible feat of athleticism and endurance is raising funds for ‘Head Up’, the new mental health charity for the Armed Forces. As he makes his way around the UK coastline, Paul will be relying on the support of the general public. Though he already gained tremendous support from thousands of people who have pledged food and shelter along the way, the ultra-marathon runner is still looking for any extra hands that may be able to help or even join him for parts of his gruelling journey.

Paul’s challenge equates to running a whopping 191 marathons in 218 days, a huge physical demand on the body. He has been training alongside world record holder, Carla Molinaro, for the past 12 months and is ready to give all he’s got for the cause he so firmly believes in.

“I can’t comprehend how hard this challenge is going to be. I know the share amount of miles to days is going to test me beyond limits, but the motivation comes from knowing all proceeds will make such a difference to the lives of people that need it most.”

The ‘Head Up’ charity, of which Paul is founder, has one major goal – to create a residential retreat in the British countryside where soldiers past and present can go for some much needed respite. Paul feels passionate about providing a non-militarised space where the Armed Forces can go to receive holistic and personalised treatment for their mental health.

“While there is some psychological treatment available, much is offered within military settings, which can trigger further harm to those already in acute mental distress; I can relate to this as I’ve been there myself.”

During his time in the army, Paul experienced many stressful events including being blown up twice and fighting on the front line. He understands the mental toll it can take on a soldier and is determined to provide help to those who need it and have helped so many others.

“The need for better mental health support for the Armed Forces has never been higher. I’ve lost over twice as many comrades to suicide than I have to combat, despite doing four tours in Afghanistan and one in Iraq. That fact can’t be ignored, and we can’t sit by and let that continue.”

Paul’s run hopes to raise funds for this life saving sanctuary, which will cost £3,000,000 to launch. His challenge starts and ends in Liverpool, after running the coastlines of England, Scotland, Wales, Northern Ireland, Isle of White and Isle of Man.