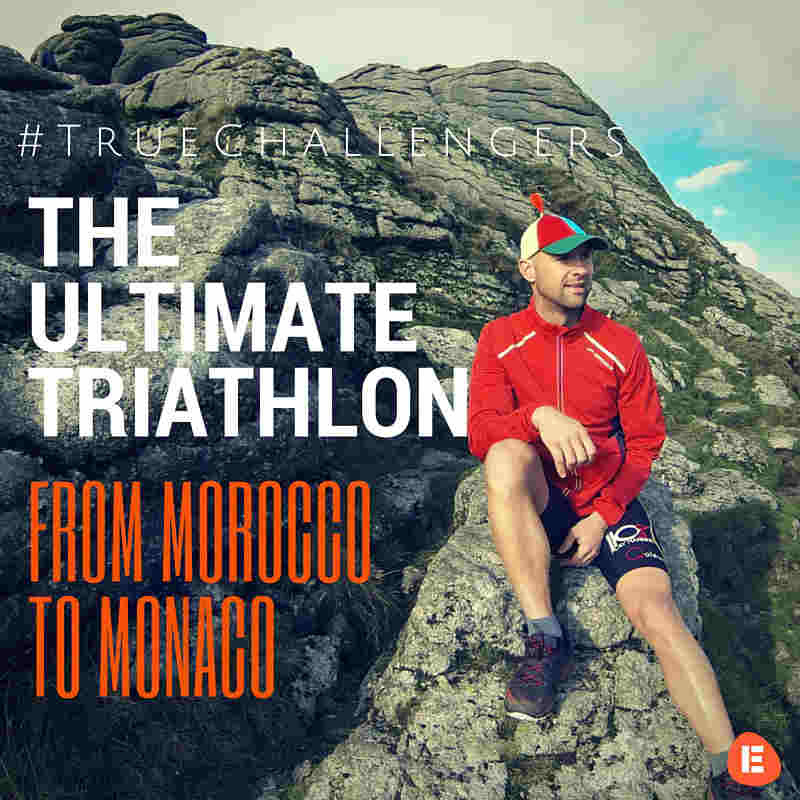 In our latest #TrueChallengers blog we take a look at Luke Tyburski as he take on The Ultimate Triathlon. Luke is no ordinary challenger, he already has a host of achievements next to his name including the fabled Marathon Des Sables. In his latest endeavours, Luke takes on a challenge that he has aptly named ‘The Ultimate Triathlon’ where he will be travelling from Morocco to Monaco over the course of 12 days. We got the chance to catch up with Luke so could tell us about his challenge, here’s what he had to say:

Imagine swimming between Africa and Europe, through one of the busiest shipping lanes in the world – The Gibraltar Straight; which is the equivalent of completing 400 laps of an Olympic sized 50-metre swimming pool. Then getting on your bike straight out of the water and cycling along the Spanish southeastern coastline to France, a distance comparable to the entire length of Great Britain. All before pounding the pavements on exhausted & fatigued legs along the south of France, amassing an eye watering 14 marathons in distance; and this swim, cycle, and run (with maybe some crawling thrown in) is to be completed in just 12 days…

The Ultimate Triathlon is a challenge, which has never been attempted, nor has anything like it been completed before either; and there may be good reason why it hasn’t.

I created this crazy challenge while staring at a world map, wanting to not only find a unique route and epic challenge to test myself both physically and mentally, but I was setting out on a new path in life; to live it every single day, and wanted to inspire others to do the same, by achieving what was perceived as the un-achievable.

When the route of The Ultimate Triathlon quite literally jumped off the screen I was aimlessly gazing at, I wasn’t a triathlete, nor had I had any sort of endurance sports background (apart from the four months I had spent training for the infamous Marathon des Sables, after calling it quits on my injury plagued soccer career.) I actually didn’t even own a bike, and hadn’t swum a length of a pool since school; but the Ultimate Triathlon was born in my head, and I was going to do it. This was three and a half years ago.

The Ultimate Triathlon is unique, as it quite literally combines three individual endurance feats, which for any sane person simply getting through one would entail several years of planning and training. But I am combining all three sporting disciplines without any days rest, and in an extreme time frame of just 12 days; it’s ludicrous right?

To help me overcome the extreme amounts of pain I’ll be putting my body through, The Ultimate Triathlon will be an interactive experience with the connected world. Through social media, live streaming at different times throughout each day, and video blogs I’ll be giving anyone who stops to follow my journey the chance to see exactly what its like, and how I am feeling at that very moment, while creating opportunities for others to encourage and feel like they are right there with me; “in the trenches.”

Fizzeek Media will be never far away with a camera in my face, as they will be creating a documentary about my journey from Morocco to Monaco, a world first, and a story of someone who set a goal, worked towards it, and then achieves (hopefully) what has been deemed by many, the un-achievable! 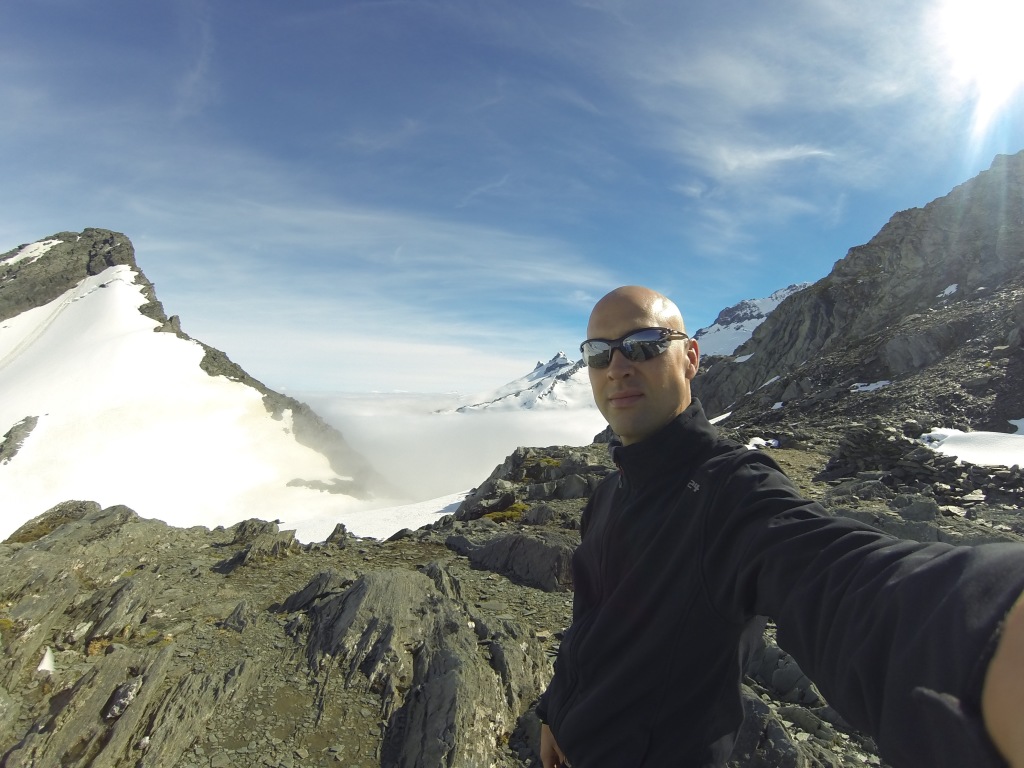 Day 1 – will be brutal! A 12-mile swim across the wind swept, choppy seas of The Gibraltar Straight, which are known more for their sailing and windsurfing conditions than for a place to swim. The Straight’s strong currents, and busy sea traffic heading in and out of The Mediterranean Sea, will not make for an easy swim.

Once I drag myself out onto the Spanish shore in Tarifa, I’ll then be straight on my bike for a 75 mile bike ride to where I’ll be ready to rest my weary head after a colossal first day.

Day 2-5 – I’ll be stuck on my bikes saddle, amassing between 200-220 miles per day along The Costa del Sol of Spain, while passing through some beautiful cities like Alicante, Valencia, and Barcelona. My crew will be following me along the way in a van, passing me food, and water as I continue to grind the pedals for anywhere between 12-16 hours each day; maybe this will be the toughest part of my challenge?

Day 6-12 – Once I am in France, I’ll be now back to using my own body as a means of transport, and I plan to use it anyway I can while travelling the 50-55 miles I need to cover every day (yes that’s 14 marathons in 7 days.) At this stage I cannot see much enjoyment coming out of this trip, but I hope to be encouraged by people who will be following my every step via social media, or via the live streaming which will be taking place several times throughout each of the 12 days of The Ultimate Triathlon. As I “run” along The French Riviera and heading for the extravagantly decadent principal that is Monaco, I only wish to be able to keep my head raised high enough to enjoy the views of this beautiful part of the world.

Arriving in Monte Carlo at the secret finishing line (which will only be revealed in the final days) a fan fare of locals, and crew members who have supported me along the way will be on hand to prop me up, and help me celebrate this monumental task.

I’ll be travelling across two continents and 3 countries before arriving in Monaco, covering over 1300 self propelled miles swimming, cycling, and running in just 12 days; I truly believe this is The Ultimate Triathlon… 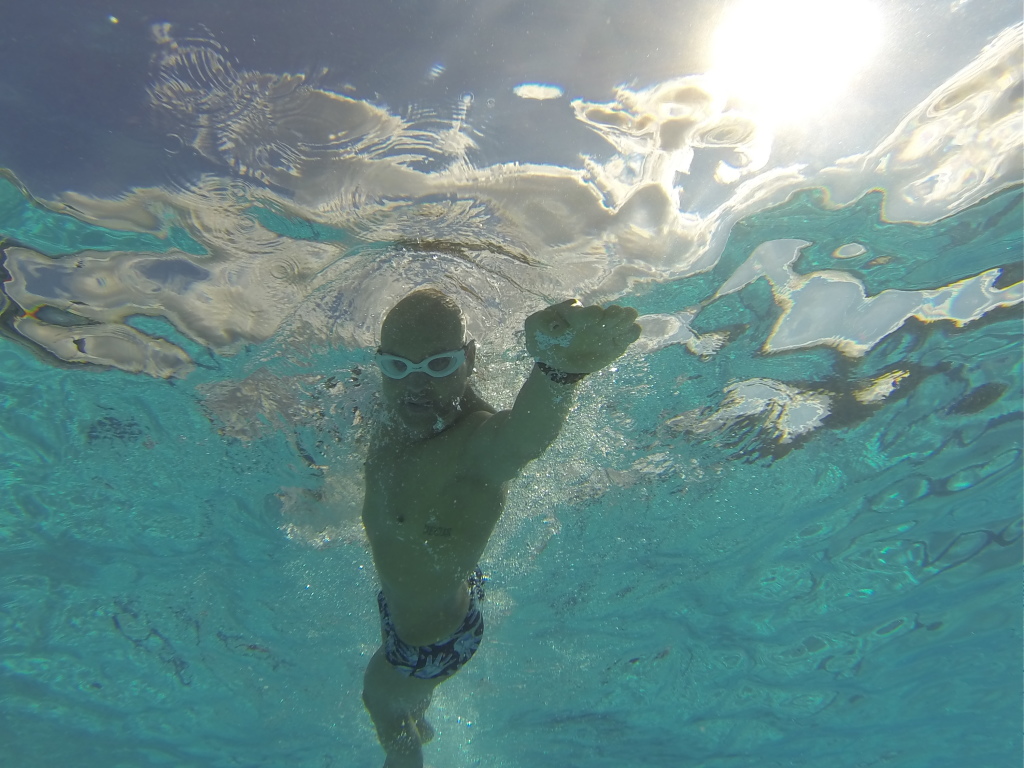 Luke getting his swim on!

We got the chance to sit down with Luke and ask him a couple of questions, here’s what he had to say:

Will the Morocco to Monaco be your biggest challenge to date? What other challenges have you taken part in?

As a multi day challenge yes, by far. As for a single day challenge, that goes to my first (and only) triathlon; The Double Brutal Extreme Triathlon. A 250 mile triathlon through the extremely hilly Snowdonia National Park in North Wales, it took me 35 hours non stop! I’ve cycled 250 miles non stop, just to learn how to surf the following day, and ran the Worlds Highest Ultra Marathon, The Everest Ultra; Which start at Gorakshep, 17,000ft above sea level. I have also completed the 155 mile self-sufficient 7 day Ultra marathon; The Marathon des Sables.

Where did the idea for Morocco to Monaco come from?

I wanted to do a unique, never been done before, extreme challenge; so I looked at a world map and quite literally the route jumped out at me, it was incredible.

My parents, they have always been there for me as support, or if I need to “kick in the backside” to get me moving forwards. I get inspired from people who challenge themselves and get out of their own comfort zones, whether I read about them, meet them, or receive an email from a stranger who heard about something I did, then went out for their first bike ride in 10 years; these “everyday role models” are the ones who I think about when I’m going through tough times.

As a role model yourself and an inspiration in the challenge community, what message do you hope to deliver by completing these challenges?

That a lot of the time what you think is un-achievable, is actually achievable; you first have to believe in yourself that you can do it, then take the necessary steps you need to complete your new found challenge.

Finishing The Marathon des Sables in the way I did. I had only five months to train for the event, with no running background. So many of my running friends, and other endurance athletes said I wouldn’t finish. Then I took an injury into the race, my toes became badly blistered, I contracted a stomach virus and became severly dehydrated through vomiting and diarrhea, then needed a IV drip, but I still finished in the top 25% of the race. This defined to me that as long as I believed I could do something, than it doesn’t matter what anyone else says; I live by this everyday.

If you weren’t training for your current challenge, what would you be up to?

Training for some other crazy insane challenge…Simply living life! I’ve created a life where it doesn’t matter what day of the week it is, I love what I do each and everyday. I give motivational talks, train other athletes, and people who want to become healthier, I truly enjoy every moment of each day of the week.

If you were to give advice to someone undertaking their first big challenge, what would it be?

Believe in yourself 100% and don’t listen to anyone who says you cannot do it, or it cannot be done (no matter who they are) There is only one person who needs to believe its achievable, and that’s you!

Right now, The Ultimate Triathlon. But once I’ve completed it (and yes I will complete it) then I’m not sure, I’ve a few ideas penciled on some scrap paper, so we’ll see what the future holds for myself.

Where do you draw your motivation for this big challenge?

Family, past challenges in my life I’ve overcome, whether it be physical, or mental (I’ve battled with depression for a long time). Any knowing that I am inspiring others to change their lives, become healthier, and get out of their own comfort zones; this keeps me going when all I want to do is stop, sit down, and rest.

And I’m a sucker for self-punishment…

You can find Luke on his Facebook, Twitter and Instagram page at these links if you have any questions for him or are inspired by his story. If you would like to find out more about his challenge you can visit his challenge website at:

In the meantime Luke, happy challenging and best of luck!

Are you inspired by the Luke’s story? Has it brought out the inner triathlete in you? Let us know what your next big challenge will be on our Facebook page!