The long way up - Walking from Mexico to Canada

In April 2016 I took a huge plunge and quit my marketing job to go on a long walk.

Having struggled through my own private battle with anxiety and depression I decided to walk 2650 miles across the entire length of America – from Mexico to Canada – to raise awareness for mental health.

Just two months after leaving gainful employment I found myself standing at the Mexican border with miles and miles of barren desert in front of me. I had no option but to start walking north and make my way to Canada. I eventually made it to the Canadian border, 144 days later, but not before experiencing some of the best and the worst moments of my life in between. Setting off from the border, I struggled and sweated through 700 miles of Californian desert, carrying a back-breaking seven litres of water but pushing on, one slow step at a time. Over a month later I reached the Sierra Nevada mountain range, waving goodbye to the desert and embracing a completely new challenge – snow.  I trekked through the Sierras, crossing mountain passes up to my knees in snow, fighting through violent snowstorms and even taking a small detour from my planned route to climb Mount Whitney – the highest peak in mainland America.

After successfully making my way through California, my journey took me through the forests and lava fields of Oregon and the rainy, misty peaks of Washington until after what seemed like an eternity, I finally reached Canada. I was filthy, tired, starving and generally worse for wear but I was alive and I had achieved something incredible.

Day after day for five months living in absolute wilderness and sublime beauty was the most phenomenal experience of my life. The simple routine of waking up at 5 am and walking until nightfall ad infinitum became my life and I loved it.

Not every day was easy – in fact, each day brought its own unique and often terrifying challenges. Along my journey, I had run-ins with mountain lions, rattlesnakes and bears. I had to ford torrential rivers, trudge across endless snow fields and withstand all kinds of extreme weather conditions. I endured severe cold, heat, dehydration, illness and hunger, losing 15kg in body weight in less than five months.

My adventure has given me a much more positive outlook on life. Rarely a day went by in the wilderness when something didn’t go wrong – whether it was being horribly ill, getting lost or having a piece of equipment fail. I just had to learn to deal with each issue as it arose and adopt the mindset that everything would turn out alright – which it invariably did.

Coming home was something of a culture shock, suddenly switching from the isolation of the American wilderness to the stressful world of London employment was not easy. But I keep myself busy always planning the next adventure. Gibraltar to London 2017 here I come! 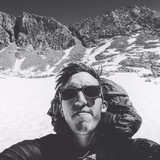 An endurance adventurer, travel writer and mental health advocate who walked 2650 miles from Mexico to Canada.