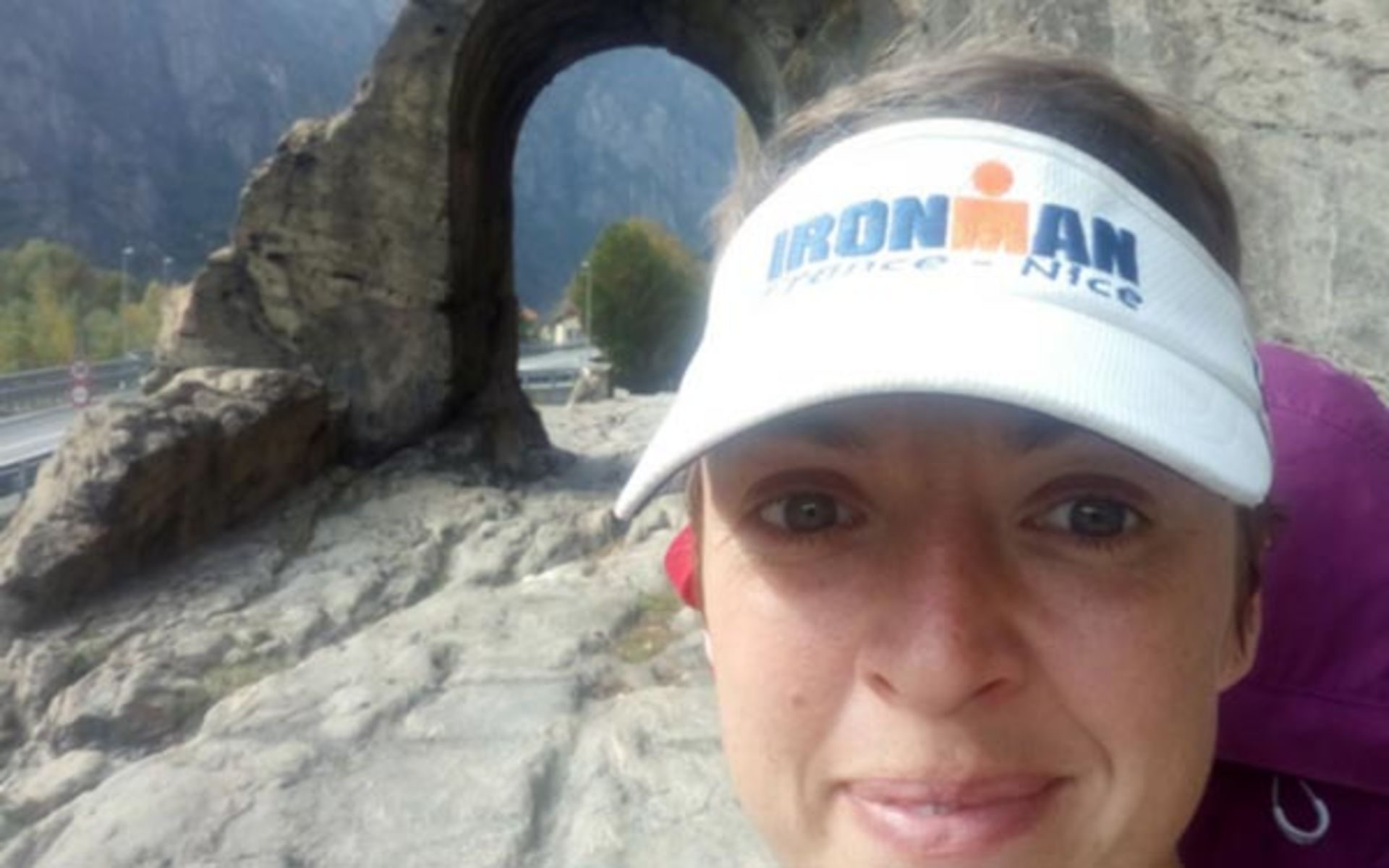 I had reconciled myself to the idea that I’d be wild camping tonight. It’s cold outside but I wasn’t too worried. I have a lot of warm things in my bag. The thing that was worrying me was the lack of tree cover, or any cover, for that matter, and the closeness of the towns, leaving little room for me to hide away. I also knew that I wouldn’t be able to charge my phone and wasn’t clear on the route for tomorrow, meaning I’d have to wing it, using road directions and staying on boring roads all day.

Instead, as I passed through Orbe (Switzerland), I thought I’d check with the tourist office whether they knew of anywhere that might have a room free, as I had tried calling every place I found on the internet.

The lovely friendly woman in the office immediately said,“I know of a nice place, this lady will look after you,“ and booked me a room in a very reasonably priced B&B ten minutes walk away. Sometimes things just work out.

Yet again, sometimes they really don’t.

The one time that springs to mind is when I arrived really late into a town in northern Italy where I knew there was pilgrim accommodation. I had called earlier in the day and explained in my rubbish Italian that I would be there late. I could have sworn she said the Italian word for “ask“ so I figured she had said she’d ask someone to be there for me.

Well I’ve told her I’m coming so I’m sure they’re going to work something out, I thought, confidently. When I finally tramped into town long after dark, I made my way to the church that the pilgrim accommodation was connected to and rang the bell for reception. No answer. I tried again. Still no answer.

Refusing to be beaten, I got my brain working. There was a small letterbox near the gate so I forced my fingers in to feel around in case they had left a key there for me. They hadn’t and I realised my fingers were stuck. In pulling them back out, I tore the skin off one knuckle and the scab is still there now. There was a lovely grassy area in front of the building but I couldn’t really justify climbing over the fence to get in. If I got spotted, it would be a bit awkward to explain.

I still refused to believe I was out of options. There was bigger gate further down so I went and tried that but to no avail. I walked around the other side and found another gate and by some miracle, it was open! I nipped in as fast as I could, closed it behind me and made my way across to another gate which lead to the back garden of the accommodation. That was closed. I realised I was in a kind of courtyard behind the church and that half of it was hidden from the street. With little other choice, I walked over to one corner of the courtyard, flattened out the pebbles that were there and unpacked my one-man tent. All I could hope was that I’d be up and away before anyone came to the church in the morning.

After getting everything inflated and unrolled, I tucked myself in and thought pleasantly about how warm and cozy I actually was, despite the pitter patter of rain that I could hear on the tent outside. I started to drift off, congratulating myself on how resourceful I’d been, when I heard the unmistakable crunch of car tyres on pebbles!

Panicking, I madly tried to unzip the tent but couldn’t find the zip. Eventually, I fumbled it open and sat up.

“Spiacente!“ I practically yelled at the priest, who was getting out of his car and giving me a bemused look. “Sono una pellegrina!“ Sorry, I am a pilgrim.

This one-liner was my get-out clause for most of the silly situations I found myself in in Italy. I am a pilgrim. It is a given that I will act irrationally on my pilgrimage. I will eat chocolate all day long, I will take short-cuts that are anything but, I will blindly jump into a bed of nettles and spend three days itching, I will wear a huge pink poncho over myself and my pack and look like a whoopee cushion, I will go massively off route just to say hi to a fellow pilgrim I have made new best friends with, I will smell bad and expect you not to mention it and I will sleep in the corner of your church courtyard. 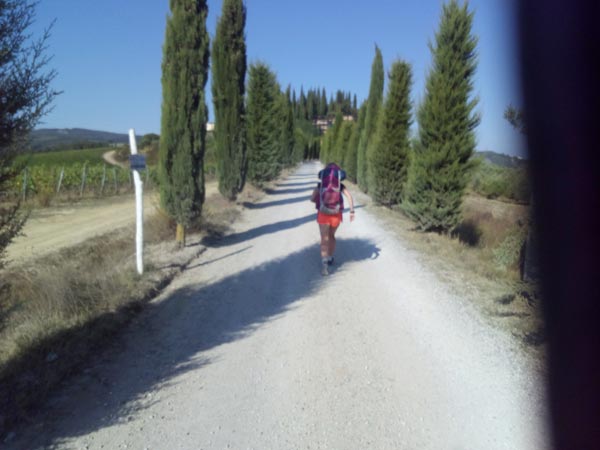 This priest was obviously familiar with the ways of the pilgrim as he just looked at me, smiled and told me to be calm. He explained that if the gate is open, it is because I am welcome. I relaxed and thanked him profusely as he exited the courtyard and left me to it. I snuggled back down, feeling much better as I had been given the go-ahead by the big cheese. If anyone asked, I’d say the priest had let me. Sorted.

Only that it wasn’t quite sorted. Because of the thunderstorm that kicked up about 2am, the temperature outside got so cold that I suddenly had myself a very real condensation issue. My feet, instead of being comfortably ensconsed in two pairs of thick toasty socks, were damp and freezing. I felt my leggings, they were also damp. I reached a hand up to touch the tent and droplets of very cold water ran down my fingers and onto my jumper. Everything was damp and cold but what could I do? It was still raining outside and at least I wasn’t being rained on. Shivering, I tried to see it as some kind of character-building experience and forced my eyes closed.

As you’ve probably guessed, apart from making for a good story here, I really didn’t achieve anything else. I gave up trying to sleep at 5.30am, got out of the tent, realised I had left my route guidebook out loose so it was now drenched and the pages tattered at the edge and packed my things, feeling maybe the coldest I have ever felt in my life. My shoes were also drenched so I just pulled them on over my soggy socks. As my sleeping bag was wet right through, I decided to wrap it around my body in an effort to air dry it as I ran.

The mist that morning was thick and I started running just before 6am. It was two hours before I could really see daylight and those must have been the most plodding, tiredest two hours of the journey so far. As I was worried to attempt the trail through the forest in the dark and wet, I stuck to minor roads and just hoped I was visible enough to cars. 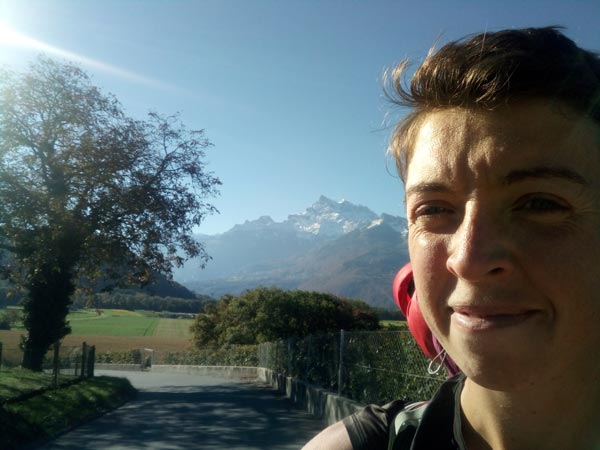 I ran with few breaks until 2.30pm that day, when I arrived at a monastery on the edge of a town and called to announce my favourite line, “Sono una pellegrina“ and ask if I could stay. When the woman said they had had a problem with wasps and I probably didn’t want to stay in case I got stung, I almost laughed! She came outside to get me a minute later and took me to the room to show me the problem. Two wasps crawled around on the floor and another was trying to get in the window.

“I think it will be a problem,“ she said.

She showed me the bowl of fruit to help myself from, where to shower, got me a bottle of water, made up a bed and asked what I wanted for dinner. It was very hard not to cry with relief and remember why I love being a pilgrim so much.

And sometimes they do. 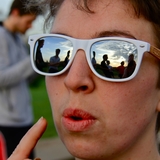