Back to Back Marathon Des Sables - The first of its kind

Gavin was the first ever runner to complete the world's toughest race, the Marathon Des Sable, back to back 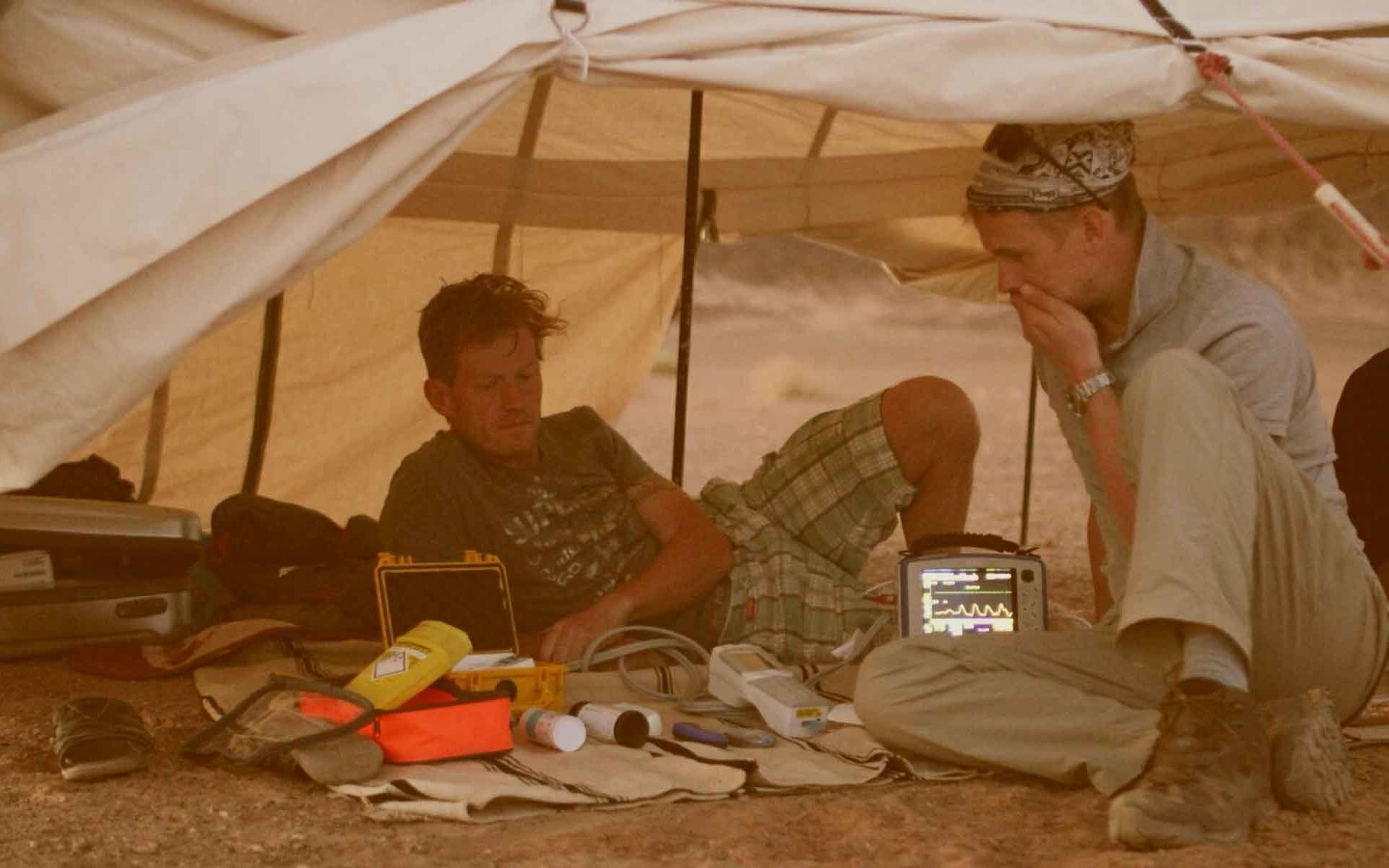 The following is a day by day account of my back to back Marathon Des Sables run, the first ever person to do it.

Just to give you a little context, let me tell you about the 24 hours leading up to race day first.

Whilst being filmed by British Forces TV at my place and at the last filming outdoor sequence, I slip without warning off a tall and muddy step that leads off the canal opposite and hear it crack. I scream out in agony and hobble and collapse onto the floor. My entire world collapses and implodes. The poor camera crew are dumbfounded and watch me crying and swearing to the gods. You simply could not write this. “The game is over” ” ITS F**KING OVER!!” 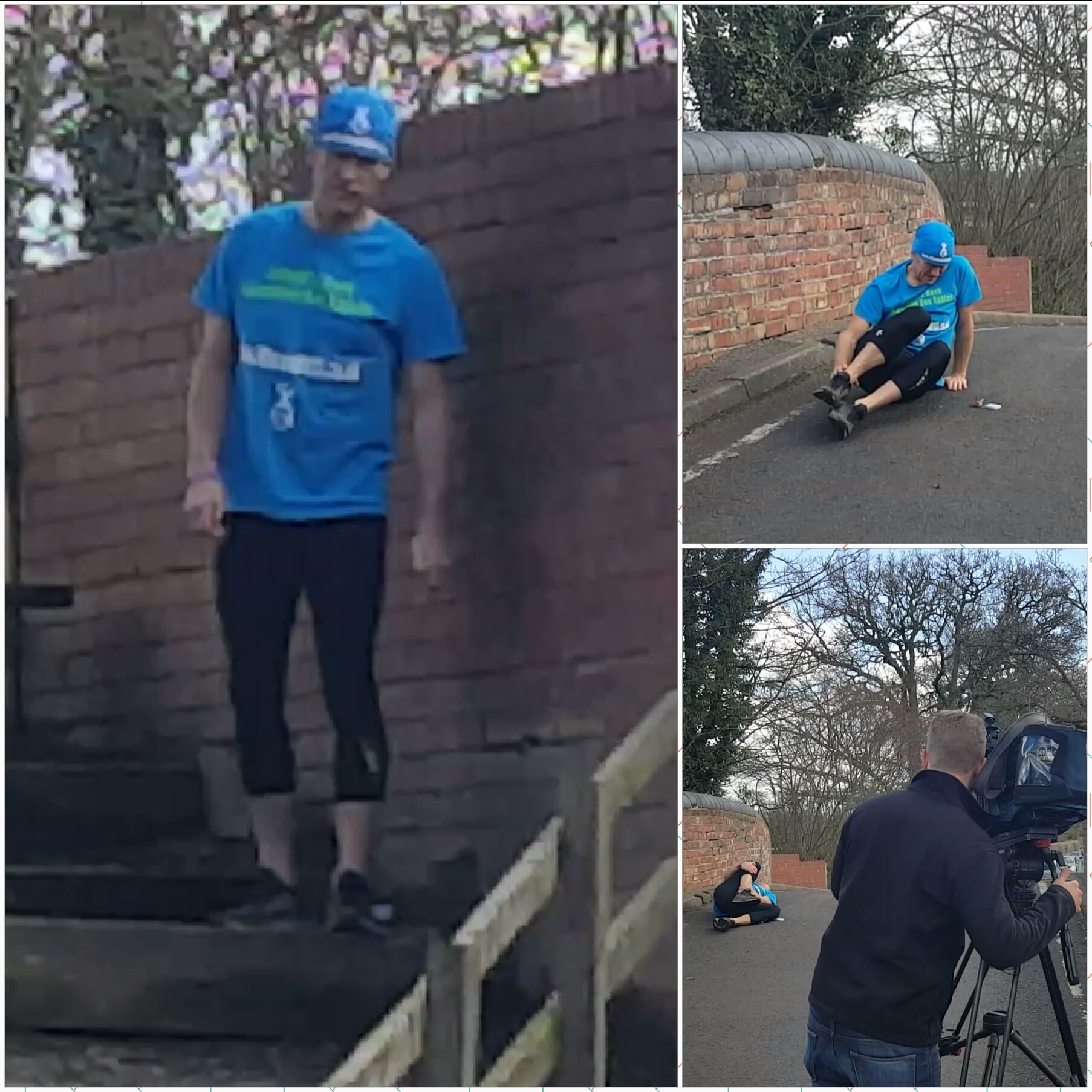 I somehow hobble back into the house followed by a very silent film crew. Hayley greets me with smiles. She was not privy to this drama outside. The colour in her face instantly drains. My foot swells as we watch to twice its size. As though by magic it rapidly blossoms into a angry red and black bloated form. Ice is applied and the pain grows cancerous like into the back of my throat. The camera crew leave. I cry. I swear. I cry more. I employ all measures to fight this situation.

I go to bed and allow the darkness of the pain swallow me up. The 90mg of codeine and 600 mg of Ibuprofen allows a brief window of opportunity to sleep. This lasts 2 hours. I wake up in excruciating agony and decide to go to A&E.  I suspect it will be a long night and take my laptop to work with. I have my laptop with me as I am so used to always working and being on it. I also realise that this could well be my portal to tell the world of this news. A prospect that fills me with dread. I actually run through scenarios on how to get far badly injured than I was. Then I would be not in this situation where people might disbelieve it and me. As I said earlier, "You could hardly write this!" The entire night is spent in A&E and I get seen in the early hours. I am told it is not broken and given crutches and advised to completly rest it for 7 days and not bare weight on it for 2-4 weeks. I arrive home at 0900. Three hours before the taxi was due to pick us up for the airport. I hear from Nick at 10.00 and I mumble to him “there’s a bit of bad news old Bean!” and relay the details. I ask for industrial pain killers to be brought and pleanty there of. My optimism battling through. Jack arrives. His reaction says it all. A jittery silence falls. Tasks are undertaken. I fight the pain with all I have and try to walk as normal as possible. An ice splint is applied. A “I CAN AND I WILL” mantra is hailed!” and off we go. This challenge is going ahead regardless.

We arrive in the early hours with 48 hours to go before I set off on Day 1.

Could my dream of being the first person in the World to successfully complete a ‘Double back to back’ Marathons Des Sables actually happen. This injury was going to have play ball. The two days went in a flash. The team and I managed to relax whilst also gearing up for the set-off.

Gear was checked and meetings were had. I pushed my foot hard. I made up my mind to go for it and accepted that it could create long standing issues. I can and I will!! 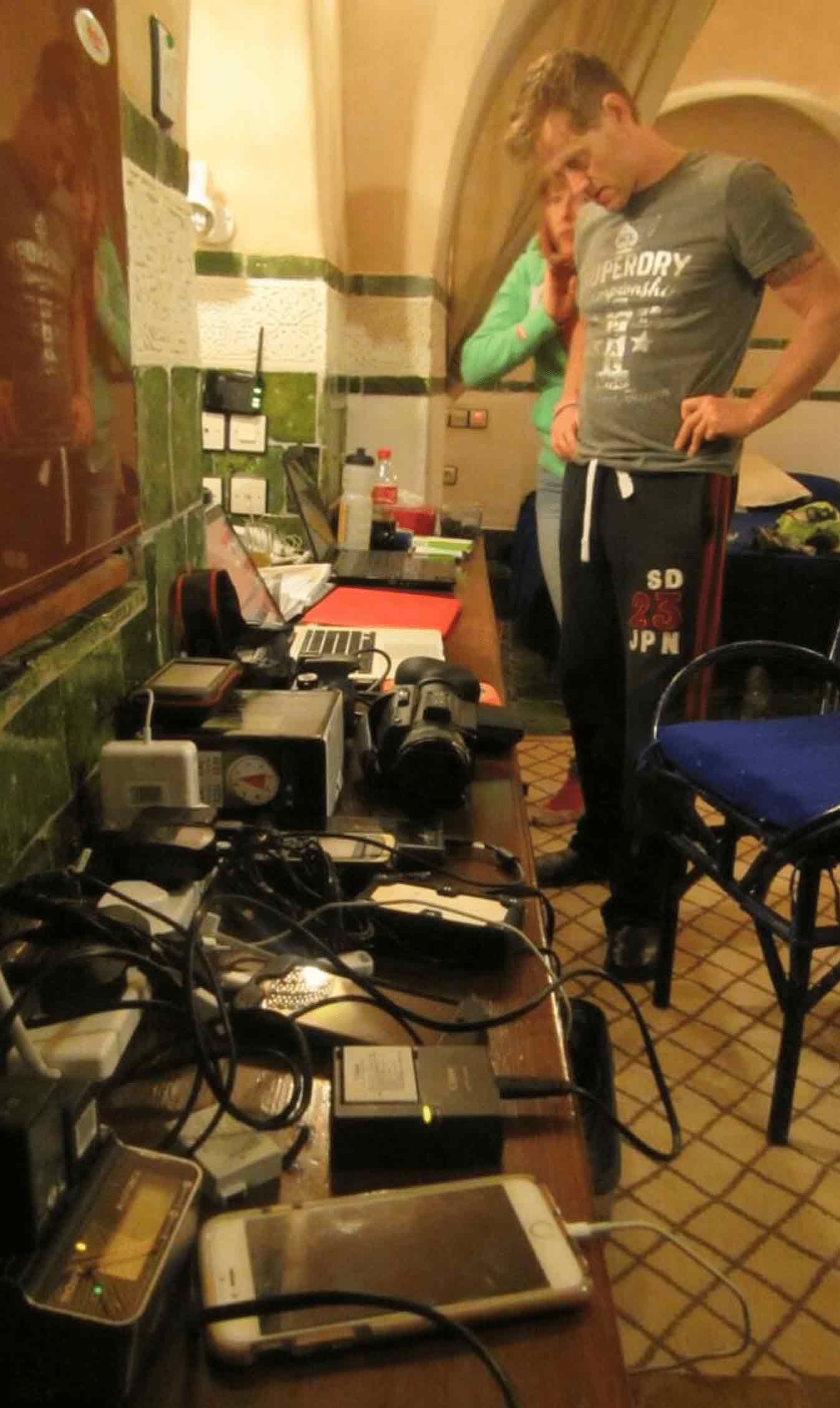 I set off running, proudly brandishing my Charity flag and being filmed by Jack. No ceremony at all. Just how I like it. I swiftly disappear. I am feeling great and ignore not the pain and don’t notice the weight of my 8kg pack. I am running like a mad whooping and hollering fool, screaming out to the gods!!! “You see you b***ards, I'm here and I made it!"

Our plan was to supplement salt loss in the race using Himalayan salt, however, it turns out we got the dose rate dramatically incorrect. Two-thirds through day one I was literally frothing at the mouth like a rabid dog...but felt strong. As if this wasn't enough, I shot off to finish the final leg of the day but unbeknown to us, the MDS route bearing that was provided was completely incorrect. This led me to go way off-course, run out of water and get into a spiralling ‘Up creek without a paddle situation’. An SOS call out via my satellite phone succeeded in alerting the Team except we had a problem being found. The G.P.R.S coordinates did not match the teams device and led them to think I was in Algeria 16 miles away...great. The satellite phone then stopped working, as if my day couldn't get any better! So all I could do was lay on a black volcanic rock literally cooking to death waiting for help. What felt like an eternity went by, when in reality, it was only an hour but long enough to deteriorate very quickly. Panic rapidly started seeping in. By pure luck, on the furthest horizon I glimpsed the vehicle flying along, but totally in the wrong direction! “STOP! STOP! STOP!” I screamed desperately into the walkie talkie. Every fibre in my soul was praying and screaming to them, I knew if they didn’t stop then they would be out of line, sight and uncontactable within seconds. But then the vehicle stopped!!! I cried out in utter relief. The tears instantly evaporating on my cheek. “TURN RIGHT, TURN RIGHT!” I pleaded. An answer came to me, as though from the Gods themselves. It’s was Nick, "Ok Gav we hear you!” I excitedly talked and guided him to me. A fast return to Basecamp was needed.

Once there Nick took bloods and processed the results whilst I rested. The results then came through and were dramatic. My sodium (salt) was off the charts and my haemoglobbin from 14.3 that morning had gone to 4.0. My body was in full shut down and collapse and I was lucky to be alive. To put this into perspective, when a patient has lost a lot of blood at a level of 7.00 you give x2 plus units of blood. This was day 1. Little could I know of the trials and tribulations that lay ahead.

I set off marvelling at its beauty and grinning like a Cheshire cat. Thankfully there were not too many hitches today. There was a navigation error that leads me off course but that is adjusted and only adds a few kilometers to the day. I get into a routine and focus. It is hard to see the team drive away after every check point and each time this gets harder, although I dont tell them this. The silence is only broken by my breathing and occasional ramblings to any beast or unusual object. My focus has to be on the ground two foot in front of me. This ankle protests with each impact, I must not stumble on it. My focus remains strong and sadly it is rare that I look up to enjoy the scenery. When I do it is to assess my navigation and plough on. The silence bit by bit starts to bare down on me and with the heat, it feels like im in some Stanley Kubrick movie. My ramblings increase. This solitude wears on my mental abilities. I focus on objects in the distance and try to run to them and when met I allow myself a pat on the back and a strict amount of walking steps to rest. Whilst I walk I navigate, drink and nibble at my daily ration of delicious billtong and jelly babies. This tactic works and the day and distance passes well. Camp routine is simple and pure. The team have their own tent and supplies and so do I. I sleep and eat seperate from the team. It is hard to see them in their routines. When they eat I try to avoid looking at what delights they have. They seem to be feasting like kings. I feel more and more withdrawn and out of the group. I am jealous of their bonding. I am so focused on my mission to battle through this and survive that I am sure that I am self-perpetuating my isolation and feelings. I know I will get more and more tired, dehydrated and hungry as the week goes by and weigh up the likely effects on my physical and mental well being. I am sure this race is designed by a mad man! 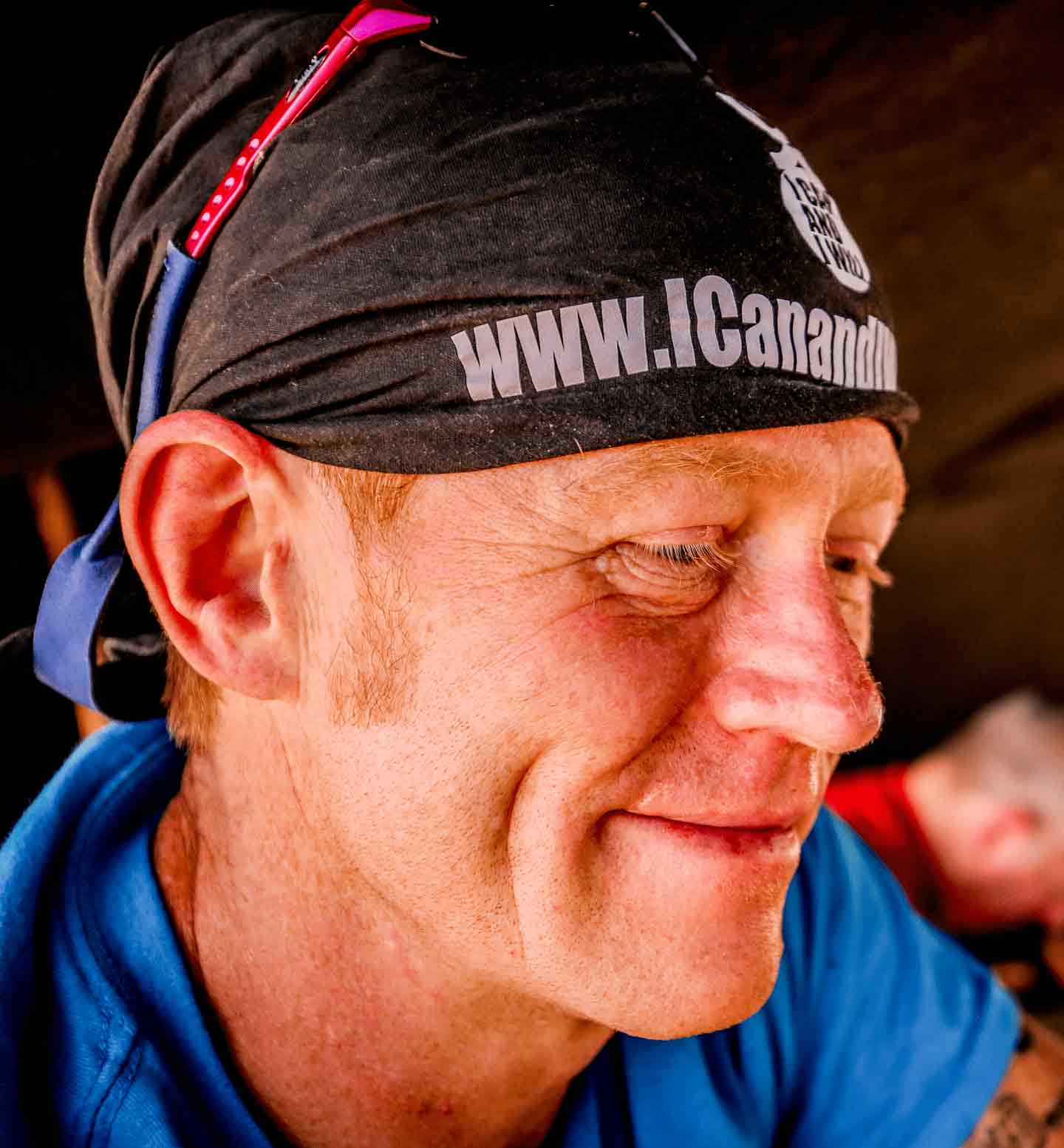 This was simply an awful day. I stumble hard 2km in and my ankle is in agony. I do not take pain killers in fear of the potential stomach upsetting and other side effects. I need to be able to think as clearly as possible as the consequences in making further errors are serious. I am caught in a catch 22. I opt not to tell the team that I have re-hurt my ankle. The pain effects me and I make errors in navigation that lead me to running about 4 km more and an extra Jebel. This increases my torment and also that of my team who try to help and intervene. It is a stressful time for all. I feel more and more isolated as the day goes on. My time is terrible and I throw away my usual positive tactics and relent to the pain and walk. This failure drives me into a spiraling depression and my pace falters further. Eventually, I finish a defeated man. How on earth will my ankle survive the long haul tomorrow? I get very upset and wander away and cry. Later that night Nick calls me in for a “chat”. Being a friend but also the medic I know is tough. I sat and listened to Nick trying to say that he was on the verge of a preemptively pulling me out of the race tomorrow due to the poor performance of that day. He knew the potential scenes of drama that would play out if this occurred and so did I. It was an awful discussion for both of us to have. (I am glad he had the balls to be a great medic and an even better friend, even though at the time it didn't feel like it.) I reassured him that I was okay and that I was up to the job. I ended the conversation with a ” We can and we will bloody do this!” and stomped away.

This is just the first three days on the MDS and whilst it may sound brutal already, trust me, it gets a whole lot harder!

If you want to continue reading the story about the rest of my challenge, go on over to my website I Can and I Will and read the whole post here. 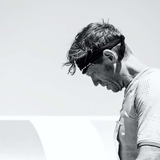