Michael Robbert takes on the OCR European Championship course, his toughest challenge yet. 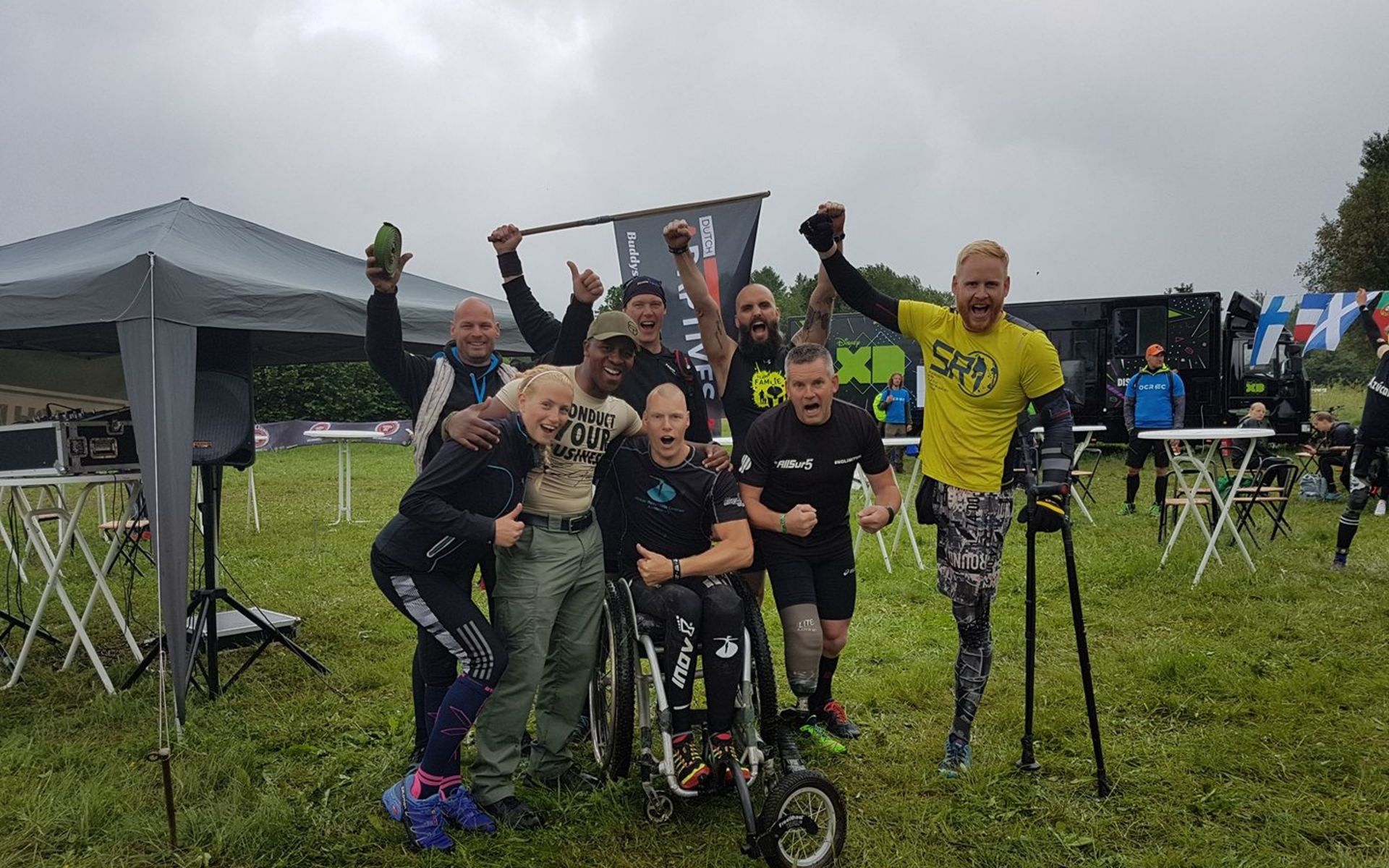 Together with my buddy, obstacle-racing enthusiast Sven Weemeas, I left Holland early in the morning to head to Frankfurt for my biggest challenge yet. Several weeks ago, the Dutch Adaptives team were invited to join the Journeymen Race during the European Championships obstacle running in Frankfurt. From the start, I knew it was not going to be an easy challenge. But I had never expected it to be as tough as it was. Throughout my career, I’ve completed various types of runs, races and other unique challenges, but this course was by far the most bizarre and challenging race I’ve ever taken on.

Together with my teammates Jacco Middelveldt (blade) and Sebastiaan van Nieuwenhuizen (wheelchair) and buddies Erwin, Joyce, Ron and Sven, we woke up early to get started at 10.00am. After going through routine warm-ups totally ignorant about what was to come, we got an epic motivation speech by Coach Pain who got our heads in the right place to compete. 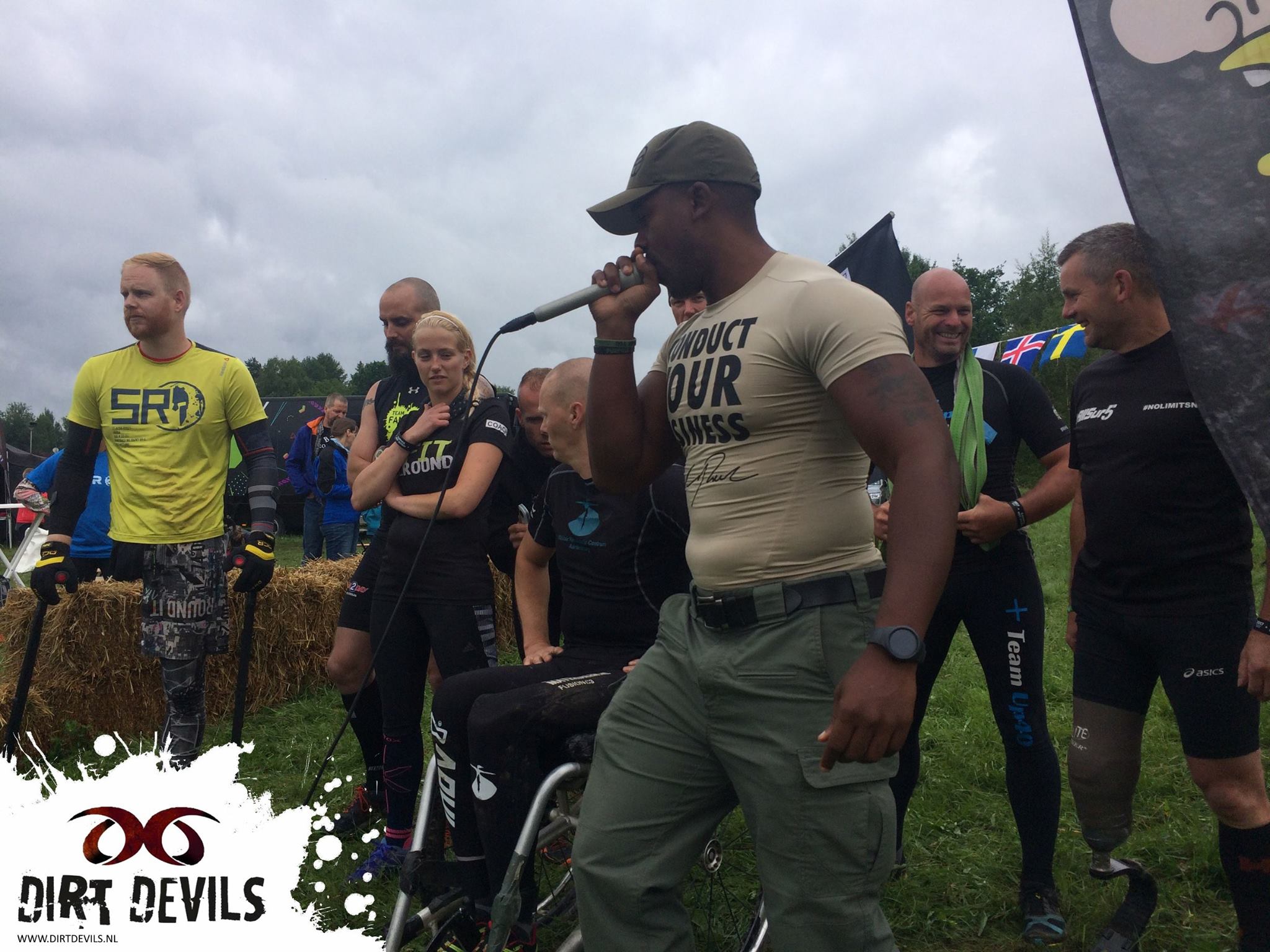 Disclaimer here, because of all the emotions, my memory of which obstacles I passed might be a little jaded, but I’ll take you along the journey from what I remember!

The first few kilometers went fine by my standards. I’d eaten a good breakfast so energy stores were high and I found myself in a good rhythm. We agreed before the race that we would go at our individual pace, meaning we would most likely break apart at some point. My friend Sebastiaan was about level with me a few km’s in so we said, ‘Let’s stick this out together’. Soon enough, the group did start to separate and it was really game-on now. There was nobody but my buddy and I out there, the pressure started to build.

Due to my limitations, I failed at a few of the obstacles; all the power was taken out of my hands. I completed the entire penalty and at half way, I got the multi combo penalty and stopped because I had been climbing for 12 minutes already.

At the load carry section, I almost broke my crutch so I did not think it was a good idea to go on with the current weight. I handed over the load to Sven as I finished the last half round without the added weight. The huge differences in the surface and the high bumps caused too much pain in my neck and I did not want to injure myself this early on, after all, there was still a long way to go. I had to hand in my wristband but there was no marshal to be seen. Had I known that I would have done everything to complete the load carry, but of course, there were consequences.

Next up were obstacles such as the weaver, konan wheels and the monkey beams, which I was proud of completing. One of the toughest was the log carry, where you had to do a 50-meter lap whilst carrying a heavy log. Nearly broken, I cursed the whole way around the forest because I could not find the right technique. After a good 10 minutes of swearing, I finally made it round. Shout out to my buddy Sven for the motivational words to keep me going, I swear if it wasn’t for him, I was ready to throw in the towel.

With the end in sight, the last kilometers were upon us and I was now in real pain. Tired, I pulled myself over the strong wall and walked to the next stage, the Verjagen Saga. Nearly 7 hours had passed now and being the last mile, I started to cry. I really wanted to stop. In my current state, unfortunately, I did not manage to finish the Saga and after 3 attempts, I had to leave my wristband. I was angry and I was disappointed in myself. Why here? 400m before the end and after about 7 hours of walking and running, no one takes my wristband. I cried, cursed and almost bent my crutches in half. I left the marshals behind crying, but they did their job because rules are rules and no exceptions for anyone, including myself. 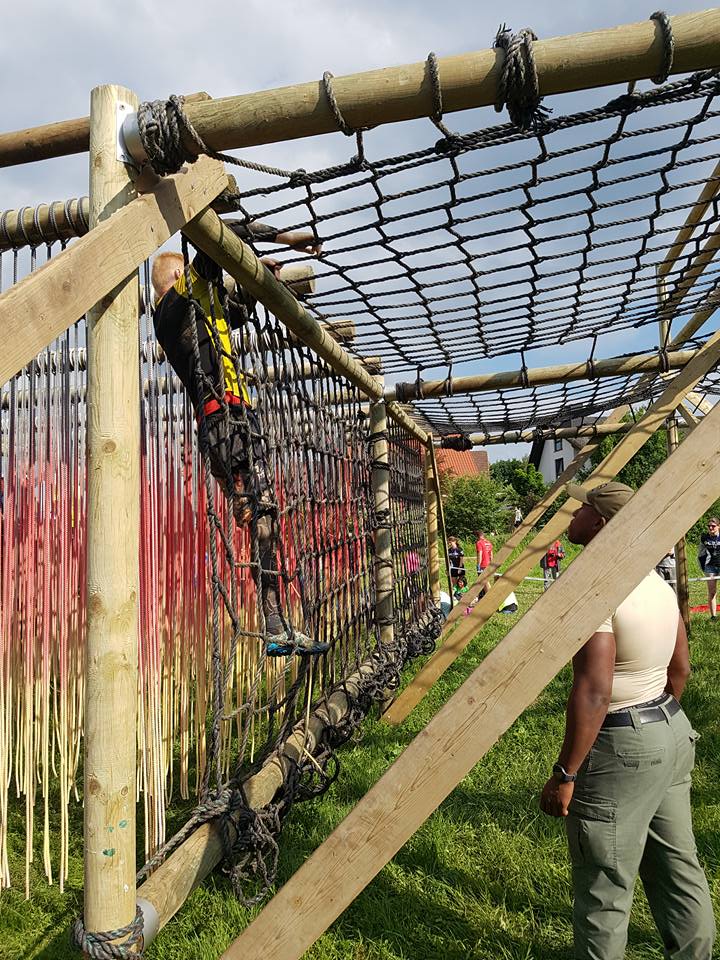 Crying and angry, I walked to the final obstacle. Luckily, there were people lining the course who helped lift me up by sharing some encouraging words. Arriving at the end obstacle I literally fell into the arms of Chief Marshall John Budu. I was angry about everything, my wristband being taken away, being physically and mentally broken, and no medal on the horizon. With my heart in my throat, I started the last 25 meters; climbed over the wall where thousands of strings dangled which you needed to gather together as a bunch to cross the obstacle. Along the way, Jacco was encouraging me with the tears of his victory still in his eyes. But with everything going on in my head, the only thing I could think about was Sebastiaan. Did he make get it or did he stop?

I had to suck it up. I had 15 meters to go and started my attempt. I had to skip the first part because all the strength in the hands was gone. I climbed over the net, over the tall beams to the ropes that I had to hang from. If you’re thinking I must have looked a bit silly, you would be correct, I felt like a monkey dangling there! The audience really started to encourage me and I did what I had to do. Hang six more times and I was done! It’s amazing what the human body can accomplish with a little push from strangers. I could already see the finish, so this last piece had to be done. I did it!!

Bruised, battered but certainly not defeated, my emotions overcame me again.  My team mate Jacco and some bystanders also started crying. It was a very touching moment for everyone involved. Overall, it took me 8 hours to complete the hardest course I've taken on. I even saw elite runners cry and fail.

After I got my medal, I heard my hero and amazing friend Sebastiaan was approaching in his wheelchair. He surfaced! If we are talking about who is a real hero, then he is. Eight hours in a wheelchair on this course is absolutely insane! Together with Jacco, myself and hundreds of people, Sebastiaan got encouraged all the way to the finish. That’s what I call TEAM SPIRIT. Pride, euphoria, pain, it all came out that day. What we have done is legendary and I say that with the utmost pride. Three men with a handicap that completed the OCR European Championship course as first adaptives is insane. Jacco with sports prosthesis, Sebastiaan in his wheelchair and me on crutches and one leg.

I want to thank the organisation of the EC for this unforgettable experience. I want to thank Sven for your support and brought me back to the Netherlands. I want to thank my friends for this team experience and Erwin, Ron and Joyce for your support. This was the most impressive and intense run I have done so far. I've seen everything from mud to swamp and from weird hills to long endless trails. The fact I have been able to participate is an experience that no one can take away from me and will remain in my memories for a lifetime. 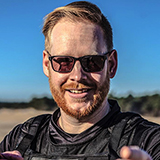 In June 2016, Michaelrobbert climbed the highest mountain in the UK, the "Ben Nevis" to raise awareness for cancer research and independency after revalidation.