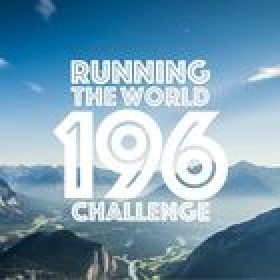 We invite you to the launch of the Running The World 196 challenge this September in Bristol. In 2018, I will be running a marathon in every country. That’s 196 marathons in 196 countries. It's going to take 550 days and result in (hopefully) around eight various world records. This is where it all begins.

What is included with the ticket?

- GLASS OF WINE PER PERSON

The special guest speakers are an eclectic and lively mix of endurance runners, mountaineers, charity fundraisers and some of the most remarkable people on the planet. This bunch is not to be missed. They are all incredibly passionate and talk with the highest authority on their subjects.

- The most remarkable and lovely man you’ll ever meet and the whole reason that this event exists
- 2 x MDS Finisher
- Terminal Prostate Cancer both in inspiration and raising funds for Prostate Cancer UK.

Nick is also the reason this event is taking place. Nick will leave the UK on January 6th 2018 to set the world record for running a marathon in every country in the world. Why? Because he met Kevin and was hugely inspired; so he wanted to do something ridiculous to raise cash and awareness for the charity Prostate Cancer UK.

Why is the event happening?

Tent 105 is the answer. All of the guest speakers you’ll be introduced to at this event were in the same place at the same time. The Sahara Desert to be precise. The rest is history. Nick met Kev and was inspired by his crazily positive attitude towards life despite facing living with terminal prostate cancer.

How to buy a ticket

On Site at Mercure Grand

Who will be there?

You! Hopefully. Anyone and everyone, adults, kids, the media, local companies, charities, and individuals.

I'm Nick Butter.  I’m a British Endurance Athlete, Ultra Runner and Motivational Speaker. You can find me on Instagram

What am I all about?

In simple terms I believe in leaving a legacy; a legacy that we all have an opportunity to leave the world better than we found it. If I’m lucky enough to get to the point in life when I’m old and grey, chatting with my grandchildren I want to know I’ve explored every inch of the planet. I want to have exhausted every ounce of my potential, challenged myself beyond what is comprehendible and leave the planet knowing I did everything in my power to make the best use of my time; to love, to work hard, and to spend as little time as possible in the so-called comfort zone.

I believe that it’s the crazy things, the things that no one is doing, and the things that we’re afraid to do… which are in fact exactly that which leaves a positive mark on the world.

Tomorrow is a maybe, but today is a privilege; let’s go make the most it.

What’s my next challenge and how can you get involved?

I am about to embark on a world record setting mission and I need your help. I am about to run a marathon in every country in the world. That’s 196 marathons in 196 countries in 550 days.

Why am I doing all this?

I am doing this to raise £250,000 for Prostate Cancer UK because a close friend of mine has terminal prostate cancer and likely won't be around when I return. This is for him. Please get involved and help.

Get Involved and Support

Sign up to the 'Running the World' Virtual Challenge. This is your chance to support me and Prostate Cancer UK. All you have to do is hit ‘sign up’ and then you have 12 months to run 196 miles. You’ll also grab yourself an exclusive medal and certificate when you complete your distance. Read all about it HERE

Please donate via my Go Fund Me page if you can.