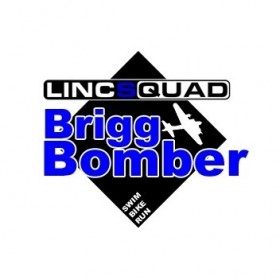 The Brigg Bomber Standard distance Triathlon is organised by LincsQuad and consists of a 1.5km swim in the river Ancholme followed by a 38km road cycle and finishing with a 10km road run.

The course is flat, fast and ideal for both experienced triathletes and those wanting to race the longer standard (also known as Olympic) distance.

The event will run alongside the Brigg Bomber Quadrathlon and will start at 8:30am with competitors being set off in waves. Allocated starting times will be emailed to competitors the week of the race. All triathletes must read the information pack prior to race weekend. This triathlon is organised & raced under British Triathlon Federation rules & regulations BTF Rule Book

LINCSQUAD was formed in 2007 by a group of like minded individuals who like to train and compete and in various multi-sport events such as Quadrathlons, Triathlons and Duathlons.

The club welcomes anyone who just wants to train/compete in only one discipline just as much as in all four and maybe even more. The nucleus of the club is based around North Lincolnshire and was born out of specifically two local events the Brigg Bomber Quadrathlon and the North Lincolnshire Adventure Challenge.

“Our aim is to be a friendly and supportive club with an emphasis on enjoying the sport.”

We also introduced the Brigg Sprint Triathlon in 2008 which has proved hugely popular with novices and regulars alike, so much so that the event continues to sell out each year.

You don’t have to be fit to be part of Lincsquad so don’t worry, everyone starts somewhere and nobody gets left behind.