A Night of Adventure Tales - 15 March 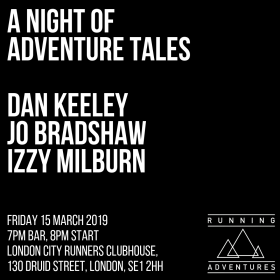 A Night of Adventure Tales - 15 March

A NIGHT OF ADVENTURE TALES Join us for a beer and listen to incredible people talk about their incredible adventures. When: 15 March 2019, doors and bar open from 7:00pm, 8:00pm start. Where: London City Runners Clubhouse, 130 Druid Street, London, SE1 2HH Cost: £8 Dan Keeley In 2012, after 6 months of ignoring the warning signs, Dan Keeley experienced a full-scale manic episode which saw him stood in the middle of major motorway Italy at rush hour as a demonstration to show the world how to ‘slow down and follow our hearts’ - which at the time was his answer to ease the vast majority of the suffering going on around the world. This was not the way to deliver a message! He believed he was ‘the chosen one’. By definition, he had lost his sanity. Dan was fast-tracked to psychiatric wards, pumped full of drugs to bring his mental-state back down to earth, escorted back to the UK and shortly after received the clear diagnosis of Bipolar Disorder. And it was during the crippling and debilitating 6 months that followed which left Dan wanting to take his own life (you go that high you’re going to come down with a heavy bang right). Thankfully he didn’t. Fast-forward a few years and Dan returned to country where he had his manic episode (Italy), but this time running (solo & self-supported) 1250 miles from the Colosseum in Rome back to the London Eye! He did it. Over 65 life-affirming days between August and October 2017 “I’ve hosted a lot of stages; spoken on many platforms; never have I seen an audience as connected and gripped by a story as they were with Dan. We laughed, we cried, and we did it together. An incredible story with a powerful message, expertly delivered.” — Liam Lonsdale, Kendal Mountain Festival Jo Bradshaw Jo Bradshaw is a mountaineer and expedition leader. In her own words, she never thought she would summit Snowdon even once so becoming the 3rd British woman to reach the true summit of Manaslu, the world’s 8th highest mountain standing at 8163m in September 2013 and then being the 36th British woman to reach the summit of Everest in May 2016 have been huge and unexpected achievements. Jo was also at Everest Base Camp on that fateful day in 2015 when the devastating avalanche struck. Jo has gone from having severe vertigo and a great ability to say no way too often to facing her fears, saying yes more and turning her life around. Jo is on route to complete the 7 summits (highest mountain in each of the 7 continents) and continue to raise funds and awareness for children’s mental health charity Place2Be. Izzy Milburn In a relatively short ultra running career, Izzy Milburn has already managed to become the 'Fastest Known Time' record holder for running across the width of the UK (86 miles in 18hrs 40mins). She won the Mount Bromo trail marathon in Indonesia and battled to an incredible third place finish in the Himalayas Annapurna 100km. 2019 will see her participate in the illusive 'Speed Project' - a 340 mile relay race from LA to Vegas.

Based out of Guildford, Surrey, but working across the UK and beyond, Running Adventures was founded in 2014 by Matt Buck, through a passion for all things running and trails.

​Running Adventures are experienced in offering a variety of services such as...

- Coaching, both online and face to face